What is Marma Chikitsa?

Marma Chikitsa is a method of healing by stimulating the body’s energy points. Marmas are also known as vulnerable spots. A key part of Marma Chikitsa is oil therapy, known as Snehana. A large amount of warm, medicated oils is applied to the entire body. There are certain areas on the body where medicated oils are applied, such as Chakras, Marma points, or specific affected areas.

Life energy is concentrated at marma points in your body. The body has 107 marma points (and the 108th is the mind), and their stimulation can bring the body mental and physical healing.
22 in the lower extremities, 22 in the arms, 12 on the chest and stomach, 14 on the back, and 37 on the head and neck.

What are the benefits of Marma Chikitsa?

Marma point therapy is a traditional Ayurvedic massage technique that helps maintain energy flow throughout the body. The seven chakras or energy centers of the body are represented by the Marma Chikitsa

Why Ayurhitam is the best choice for Marma Chikitsa?

Our practitioners have a regular spiritual practice that enables them to connect to higher consciousness and take care of the condition intuitively. Our team of practitioners follows the century-old methodology that helps to sustain the flow of energy by understanding the major marma points in the human body corresponding to the seven chakras. A human body needs revitalization to perform its functions normally and efficiently, Ayurhitam consists of professional therapists who have been practicing these therapies for ages.

Get a 15-min free consultation.

What do Our Clients Say: 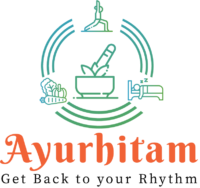